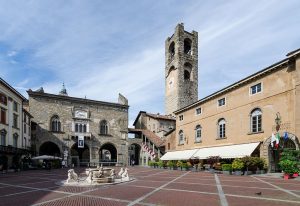 Both the city and its territory are rich of numerous outstanding monuments: from the Basilica of Santa Maria Maggiore and the Venetian Walls, to the San Tomè church and the San Pellegrino Casino.

Bergamo’s architecture is truly grand. The core is the beautiful Piazza Vecchia, not to mention the amazing monasteries inside the Walls and on the surrounding hills, like the recently restored Astino monastery. But there is so much more, indeed: ancient fountains, such as the surprising Lantro Fount, the amazingAngelo Mai Library and its invaluable volumes, or the Piacentiniano downtown centre with its splendid buildings.

Even the province is full of unique monuments, such as the San Pellegrino Thermal Baths, built inside a lovely Art Nouveau palace decorated with XX Century frescoes and contemporary furniture, or the Astronomic Clock and theDanse Macabre in Clusone, along with the Suardi Chapel in Trescore and its precious frescoes by Lorenzo Lotto, and – last but not least – the Malpaga Castle, where the Renaissance mercenary captain Bartolomeo Colleoni had his court. On the inside, the frescoes ascribed to Romanino represent processions, dinners and hunting parties.

SHOPPING IS ALWAYS A GOOD IDEA